From Kawa Scans: Distributing thrilling videos in secret. A school game that puts life and death on the line. Read more


The Prequel to the series "Dokgo". Read that first before you read this. Read more


From DesperateScanners: In a land where no magic is present. A land where the strong makes the rules and weak has to obey. A land filled with alluring treasures and beauty yet also filled with unforeseen danger. Xiao Yan, who has shown talents none had seen in decades, suddenly three years ago lost everything, his powers, his reputation, and his promise to his mother. What sorcery has caused him to lose all of his powers? And why has his fiancee suddenly shown up? Read more


Two boys met on a stormy night: Tsukushi, a boy with no special traits at all, and Jin, a soccer genius. On that night, Jin drags Tsukushi into the world of high-school soccer. It was nominated for Best Sh?nen Manga at the 39th Kodansha Manga Awards. The series was number twelve in the Nationwide Bookstore Employees' Recommended Comics of 2014. Read more


Tang Sect, the most famous martial arts sect of all. By stealing its most secret teachings to fulfill his dreams, Tang San committed an unforgivable crime. With his ambition attained, he hands his legacy to the sect and throws himself from the fearsome “Hell’s Peak.” But he could have never imagined that this would take him to another world, one without martial arts and grudges. A land where only the mystical souls of battle lay. The continent of Douro. How will Tang San survive in this unknown environment? With a new road to follow, a new legend begins… Read more


A land with out magic, dou-qi, martial arts, but have essence spirits. This is the combat continent 10 000 years after the formation of Tang Sect. A new hero and his friend walks the land, a new "Seven Monsters of Shrek", will they keep up the name of the Tang Sect? Or will it crumble due to a new essence system? Prequel: http://www.mangahere.co/manga/douluo_dalu/  Read more


Kudou Shinichi is an exceptional high school detective. While investigating one, he was caught by a pair of nefarious men in black that he was watching and forced to take a dangerous experimental drug. Leaving him for dead, the criminals disappear. Instead of being killed, the dangerous drug put him back to a little kid. To preserve the illusion of his disappearance, Shinichi adopts a new name based on his favorite author (Arthur Conan Doyle) and Edogawa Ranpo and becomes Edogawa Conan. Ran, his childhood friend, takes this little boy under her wing and brings him to her home. Conan now lives... Read more


In a world where everyone has a monster crest from birth, a select few rise to become Monster Trainers. Reyn Erhardt, a slime trainer, the lowest of the low, cares nothing for status and just continues his daily regimen of training for his personal slime, Pem-Pem. Yet in school dominated monsters as grand as dragons, those who cannot hope to rise to the top take out their frustrations on the lowest ones, and Reyn and Pem-Pem make for easy marks. Or do they? Read more


Dragon Ball Super summary is updating. Come visit MangaNelo.com sometime to read the latest chapter of Dragon Ball Super. If you have any question about this manga, Please don't hesitate to contact us or translate team. Hope you enjoy it. Read more

Daiya no A Act II


Sequel to Diamond no Ace. Continuation of Daiya no A - our protagonists continue to advance at Koshien, the biggest high school baseball tournament in Japan. Read more

Drop!! ～A Tale of the Fragrance Princess～


When she wandered the border of life and death at the age of three, Cordelia realized that she had been reincarnated as a high handed noble girl in a game she had used to play. A dark future would await her if she fell in love with the Prince. Therefore, for the sake of a normal life, there was no road but to avoid the powerful prince and the heroine…… But just doing that would be boring. She finally was blessed with a beautiful appearance so she resolved to polish herself, firstly by beginning to study herbology…… This is that... Read more


From MangaHelpers: 29-year-old programmer Suzuki Ichirou finds himself transported into a fantasy RPG. Within the game, he's a 15-year-old named Satou. At first he thinks he's dreaming, but his experiences seem very real. Due to his use of a 3-time-use special power (meteor shower), he ends up wiping out an army of lizardmen and becoming very high level. He hides his level and plans to live peacefully and meet new people, though developments in the game story (like the return of a demon king) might get in his way. [tethysdust] Read more

DICE The Cube that Changes Everything Webtoon


Dongtae is rock bottom in everything. Looks, grades, life, everything. But all that might change. If you could change your life by playing a game, would you? Original Webtoon / English Version by Naver Read more

DICE: the cube that changes everything


Dongtae is rock bottom in everything. Looks, grades, life, everything. But all that might change. If you could change your life by playing a game, would you? Read more


After getting his sister devoured by a dragon and losing all their supplies in a failed dungeon raid, Lyos and his party are determined to save his sister before she gets digested. Completely broke and having to resort to eating monsters as food, they meet a dwarf who will introduce them to the world of dungeon meshi - Delicious cuisines made from ingredients such as the flesh of giant bats, walking mushroom, or even screaming mandrakes. Note: Nominated for the 9th Manga Taisho Award in 2016. Read more


Humanity's peaceful days all at once transform into an unspeakably odious hell. The sudden invasion of wasp-like insects, along with gargantuan "dolls" wielding their enormous alien weapons, annihilating everyone in their path. In the middle of the chaos, high school first-year, Iruma Ikaruga, fights to save his best friend and his beloved senpai from the dolls' assault with an unyielding spirit. However, all that awaits him is despair. Just what are the enormous puppets known as "Dolly"after? What fate awaits Iruma? The curtain has risen on humanity's "puppet show" of unimaginable despair, and the battle for survival has begun. Read more


D.Gray-man follows the adventures of 15-year-old Allen Walker, whose left arm can transform into a monstrous claw and destroy akuma, evolving machines created by the Millennium Earl to help him destroy humanity. As ordered by his master General Cross Marian, Allen becomes an Exorcist, people who can destroy akuma, for the Black Order, an organization attempting to stop the Earl. He becomes a powerful asset for the Order because he can detect disguised akuma with his left eye. Allen is sent to recover pieces of Innocence, a substance that gives certain people, called Exorcists, the ability to destroy akuma. The... Read more


D.Gray-man follows the adventures of 15-year-old Allen Walker, whose left arm can transform into a monstrous claw and destroy akuma, evolving machines created by the Millennium Earl to help him destroy humanity. As ordered by his master General Cross Marian, Allen becomes an Exorcist, people who can destroy akuma, for the Black Order, an organization attempting to stop the Earl. He becomes a powerful asset for the Order because he can detect disguised akuma with his left eye. Allen is sent to recover pieces of Innocence, a substance that gives certain people, called Exorcists, the ability to destroy akuma. The... Read more

Darling in the FranXX! - 4-koma


Official 4-koma manga for Darling in the FranXX. Read more


After Kang Hu’s death from bullying, the family was torn into pieces. His younger brother suppresses his resentment and heads back to school. The story begins exactly one year after Kang Hu’s death when his brother seeks to destroy the delinquent circle... Original Webcomic http://www.lezhin.com/ko/comic/dokgo Read more 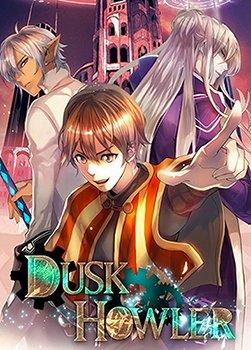 
Kim Jee-Ha comes from a good background with decent grades and test results; however, he has one big flaw - when it comes to official events like university interviews for example, he is horrible. To overcome his social awkwardness, he embarks upon the virtual reality game Trikia where he meets an eccentric high level undead Nine - his future guild master. Read more

Dear, Only You Don't Know!


Every woman has a secret they must risk everything in order to hide it. The new story of those hidden secrets, 'Dear, Only You Don't Know!" Read more


A rising boss in the underworld is forced to lead a double life as a police officer and a gang boss in order to find the killer of his brother. RAWs: https://www.lezhin.com/comic/double_casting Read more


Kazama Kenji likes to believe he is something of a delinquent. Moreover, others seem to like to agree that he is. Of course, Kenji's gang finds their way to a group of four not-so-normal girls - Chitose, Sakura, Minami and Roka - and all at once, whatever reputation he may have, is nothing compared to the outrageous behaviour of the girls. Shanghaied into joining their club, what will happen to his everday life from that point on? Read more


This manga follows the story of 7 high school students, 3 boys and 4 girls in year 1 class A. Their not-so-ordinary ways of thinking and everyday lives are loaded with comedy, dirty jokes. At times, debating about how to use a toilet, at other times, risking their lives over growing body hair in unusual places! Read more


Set in 2025, a roboticist named Fudou Yuuki joins a project involving a large mural depicting humanity's true past as well as the ancient but advanced technology found in Antarctica. Read more


Kim Ro Sa has long dreamed of being a singer and finally her dream came true. However, her career did not go as smoothly as expected. Until one day, she met Chef Ian, who turned out to be a judge of the survival cooking event she had attended. Read more

Don't Come Near My 10M Boundary


A dark fantasy about demons, murder, and a king. Read more